On the average day in Provence Hillary might take a leisurely stroll up to the small village of Gordes for a freshly baked pastry (or two or three…). 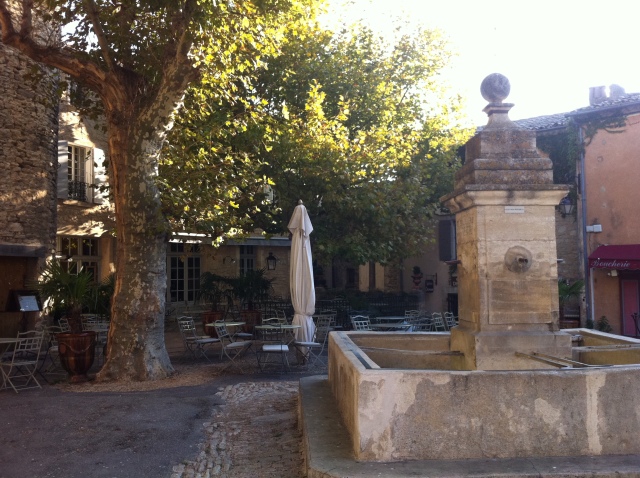 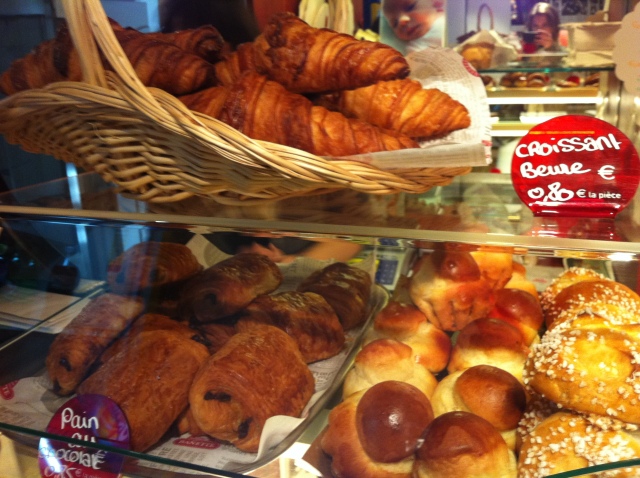 After breakfast, four shots of espresso, and two glasses of water, it is time to go for a run through the countryside, past fields of grapes and old stone farmhouses. 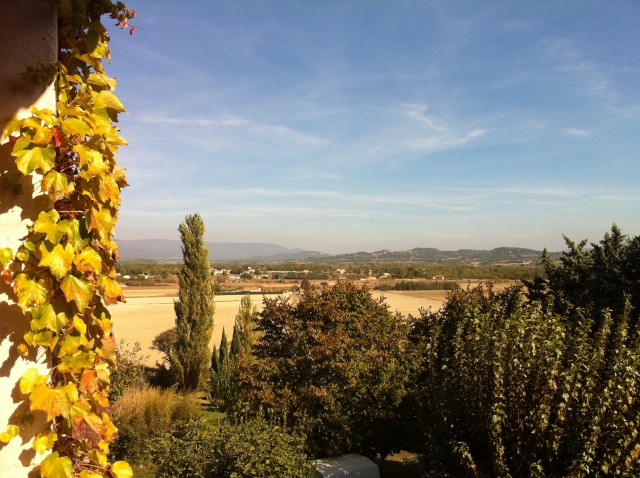 Then it is time for a terribly rich and fattening lunch, such as this tagliatelle with cepes and foie gras from Cafe de la Poste in Goult. 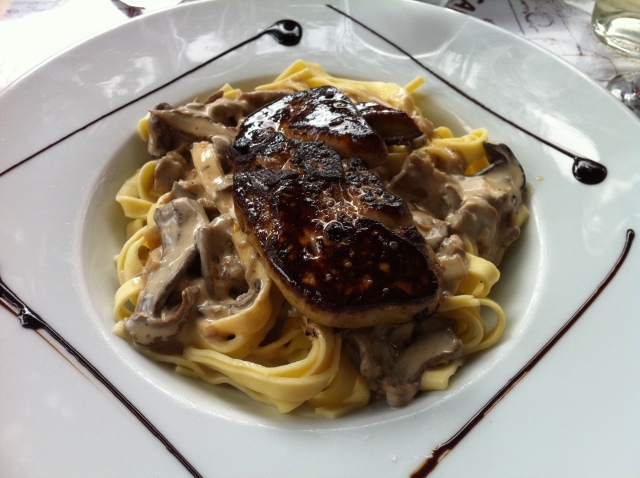 After lunch, it is time to read and nap for a couple of hours.

Around 7:00, it is time for a terribly rich and fattening dinner, such as this tartiflette — layer boiled potatoes, sauteed onions, crispy lardons, creme fraiche and an entire wheel of reblochon cheese, pour over a bit of white wine and chicken stock, and bake at 350 until golden brown and crisp. Tartiflette is one of those foods that is always better on day two. Yum. 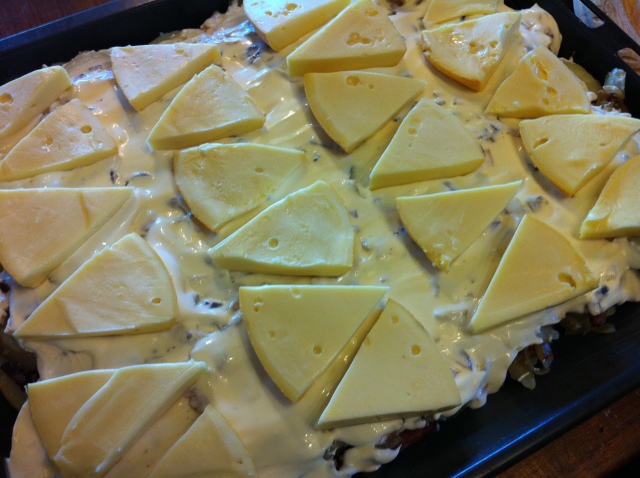 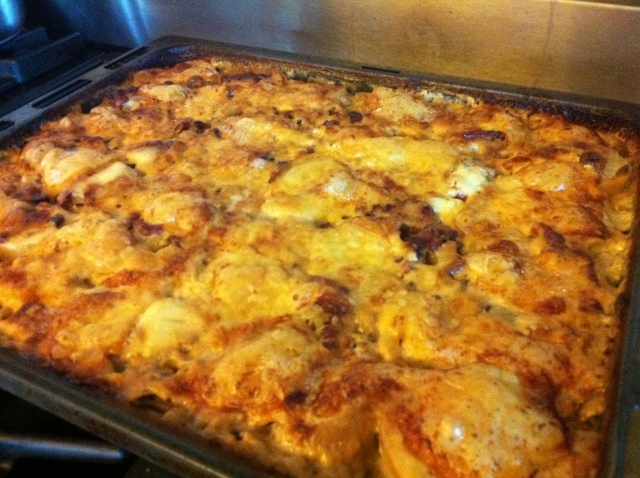 The day concludes with bars of chocolate and perhaps a movie about the French resistance. Bon nuit indeed!

And if you were feeling bad about your situation once you’ve read that, you can now read Amy’s typical day this past week and feel much, much better…

More than half of the week Amy awoke to rain. 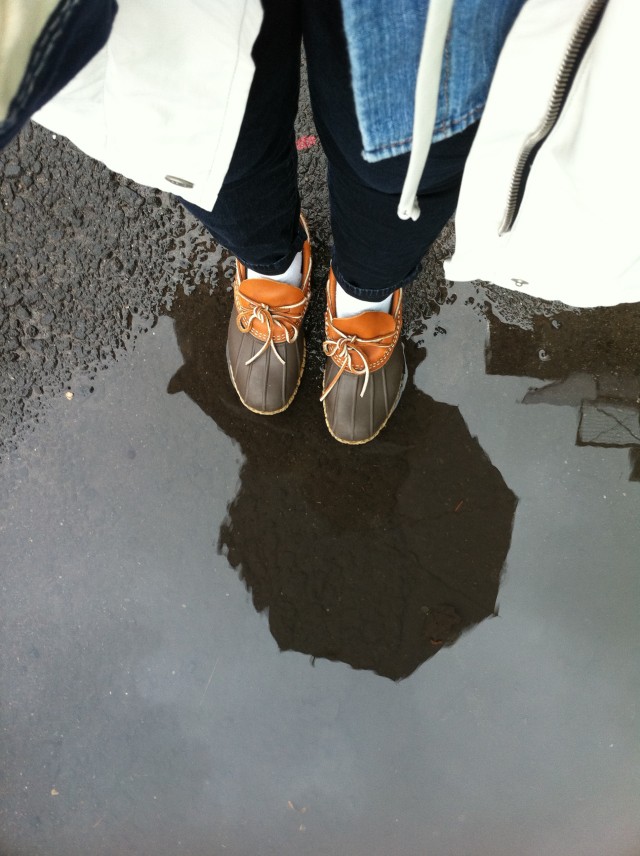 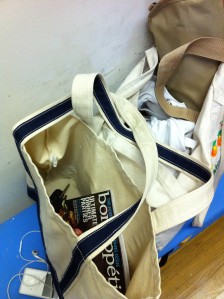 Armed with an umbrella and duck boots she took to the mean city streets.  Seen here the average load on the average schlep.

A typical day might sound a bit like this: Wake, caffinate – this week with tea since a nice Autumn cold had set in. Deal with apartment drama such as no hot water or large leak in the ceiling forming a small pond near the kitchen.  Then onto dealing with mentally unstable landlord, job hunting, sharpen knives, think of using them on mentally unstable landlord instead of for food, class (the only redeeming part of a horrible week – making charcuterie!) wine, sleep, wake, repeat.

Having finally had enough of the mentally unstable landlord, by weeks end Amy found herself catapulted back into the world of apartment hunting (a tiring and expensive process).    In need of comfort, she made a rediculous cheddar and blue cheese bacon mac n’ cheese Sunday night (picture not available due to the hastiness in which it was consumed.)

Amy is looking forward to Hillary’s return to NYC.  Of course to see her friend, but also because she’s in serious need of the Châteauneuf-du-Pape Hillary is bringing back with her.

This entry was posted in Foodie City Guides and tagged prospect heights, provence. Bookmark the permalink.