Lentils sort of baffled me – how does this tiny legume pack such a flavor punch!? (to which you’re probably thinking, “duh Amy, ever heard of caviar?”) I know these healthy little guys make a killer soup or warm salad but I wanted to see them in something different.  Hence, the crostini.  I had purchased some Saga brie blue and thought they’d play together quite nicely so I grabbed a baguette, a few other ingredients and the lentils n’ blue crostini was born.

These little bites would also be a fantastic appetizer or hors d’oeuvres – play around with the components – so many options!

First cook the lentils – using the ratio 1 part lentils : 2 parts liquid.  Bring the liquid up to a boil and simmer for about 20 – 25 minutes until the liquid has been absorbed and the lentils are soft but still have a little bite.

I really liked the mushroom broth with the lentils but you could use chicken stock, water, whatever you have on hand.  Season with S&P.

Meanwhile caramelize the shallots in butter.  Lots of butter, low and slow, and maybe a little dash of sugar. Season well. Set aside.

Slice and toast the baguette until slightly brown, brush with a little olive oil or butter if you’re so inclined. 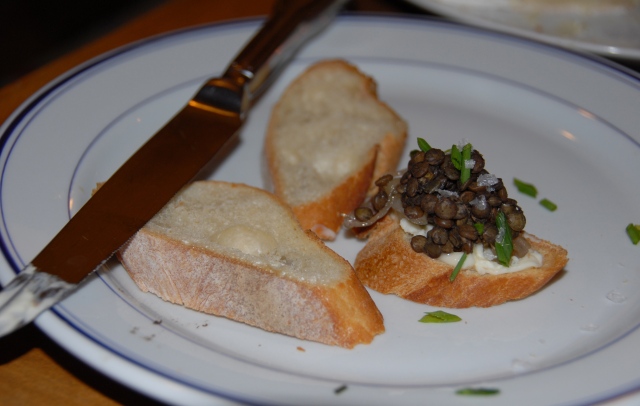 Note: the cup of lentils will make more than enough for a baguette’s worth of crostini and then some – use the rest atop salads, make into a soup, whatever you please!