Being that the holiday season is upon us and nostalgia is at every turn I began to seriously crave clam chowder.   Growing up, Christmas Eve in our house meant a huge spread of hors d’oeuvres. And at the head of the table – a large pewter tureen of steaming hot clam chowder.  The soup was always my Dad’s job – assembling and doctoring the chowder after we’d return from afternoon mass, before the evening of steady grazing began.  In recent years my sister made sure it still had its rightful spot at the table.  This year however, I’m thinking I’ll try my hand at it…this slightly spicy version has surely won me over, why not share it with the whole family!

*Note: New England clam chowder has always been one of my absolute favorite soups. I think you’d agree that there is nothing worse however, than bland gloppy soup often passed off as clam chowder but with not nearly enough of the good stuff – the bacon! the veg! the clams! (duh).  Never fear, this version has a thin but flavorful broth and is jam packed with the good stuff.  I’m certain you’ll enjoy it.

In a large heavy bottomed pot cook the bacon.  Once it starts to give off fat add butter, the diced onions, garlic and thyme sprigs.  Cook until the onions are translucent but do not brown. 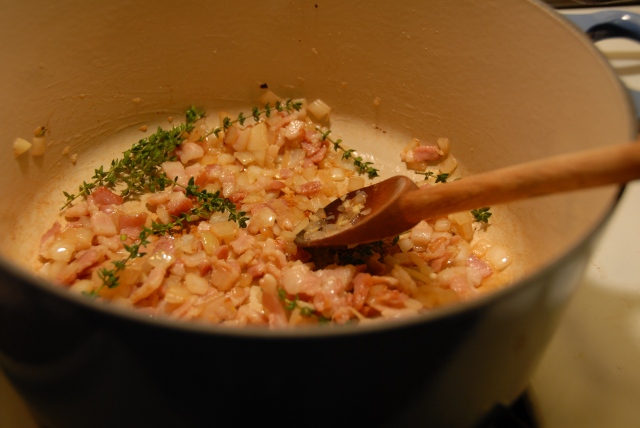 Once translucent sprinkle the flour over the onion and bacon and stir to coat.  Strain clams and reserve the juice, set clams aside.  Add all the clam juice to the pot and bring to a boil.  Reduce heat and add the half & half.  Simmer for about 20 minutes and season.  Add plenty of pepper and a touch of salt.  Add potatoes and corn and remove thyme sprigs. 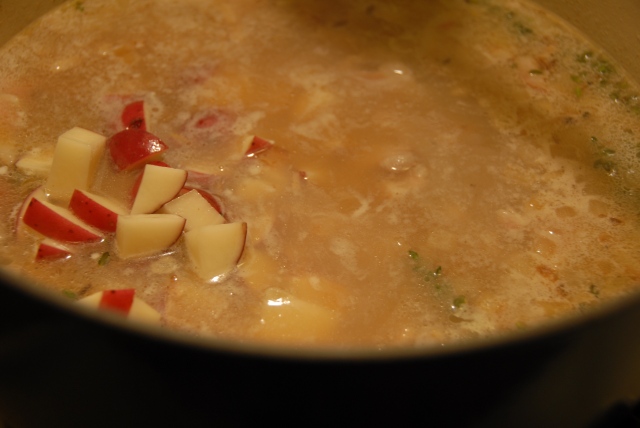 Once the potatoes are fork tender add the clams.  Season to your liking with the cayenne, salt & pepper and keep the soup on low heat until ready to serve.  (Don’t allow the soup to boil – it may curdle the cream & toughen the clams). 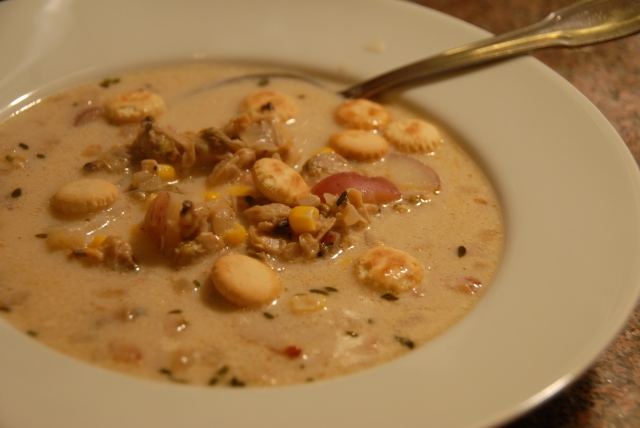 Serve, of course, with plenty of oyster crackers.