Ahh ramp season. Such a short period of time, and these little guys are popping up in every restaurant in town. I got really excited about the #rampstagram hashtag on Instagram… until I realized that it was mostly used by discount ramp (as in let’s take the ramp, not the stairs) companies… oh well.

Since I’ve been on a major taco kick recently (maybe because I have a mild obsession with Salvation Taco‘s tasty bites), I wanted to find some way to make a ramp taco, and what better protein to add than shrimp!

As some of you may know, I’m not really a seafood expert, but I’m definitely improving! I didn’t even have to sit these shrimp down for a chat like last time.

So here you have a delightful recipe for shrimp tacos with lime mayo, blackened ramps, and ramp chimichurri. What could be better!

For 4 small tacos you will need:

Get your broiler going (or grill!).

Next, get your shrimp soaking in some deliciousness. Melt the butter in a large bowl, add the adobo sauce, lime juice and some s+p and toss in the shrimp. Set aside.

Make the ramp chimichurri — blend together 1 bunch of ramps (sliced into smaller pieces) 1/4 cup olive oil, one clove of garlic, 1 tbsp red wine vinegar in the food processor or in a small bowl with an immersion blender. Add salt & pepper to taste and set aside. 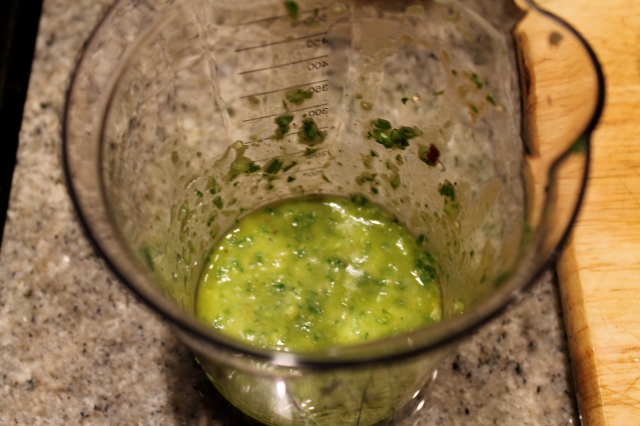 Now for the blackened ramps! lay the two remaining bunches of ramps out on a small sheet pan, drizzle with olive oil and season with a bit of salt & pepper. Broil them for about 3-4 minutes or until thoroughly blackened.

Next for the shrimp! Pop them on long skewers (or just lay them out on a small sheet pan) and broil for 4-5 minutes or until cooked through.

Now to assemble! Heat up the tortillas in the microwave for about 15 seconds so they are nice and pliable, spread each with some lime mayo, top with ramps, then 3-4 shrimp, and a drizzle of ramp chimichurri. 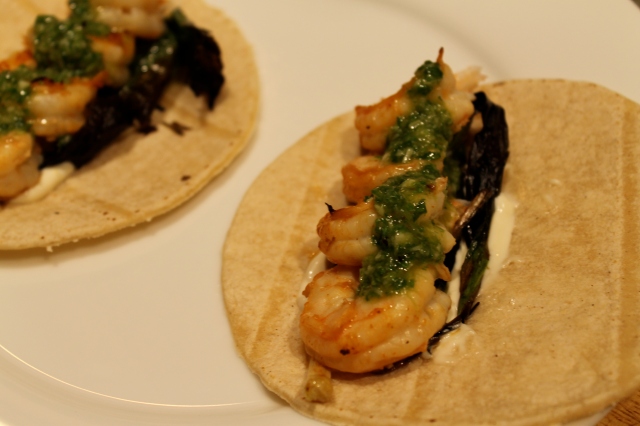 This entry was posted in Ramps, Shrimp. Bookmark the permalink.