As Hillary mentioned – ramp season is fleeting.  So I decided to preserve their goodness in what else, but butter.  Oh, and if you were wondering who first ramped up the ramp here’s a great Grub Street article on the subject…

I originally found this amazing compound butter recipe while thumbing through April Bloomfield’s A Girl and Her Goat (I am lusting after this beautiful cookbook!).  April slathered the butter on baguette toasts and topped them with fried quail eggs – I opted for a satisfying pasta with bacon, Swiss chard and a good amount of the butter mixed in at the end.

First for the ramp butter – the butter should be soft – truly room temperature.  Prep the ramps – clean them well (mine were chocked full of dirt).  Line up the bottoms and thinly slice them from the white bulbs all the way to the top of the leaves. 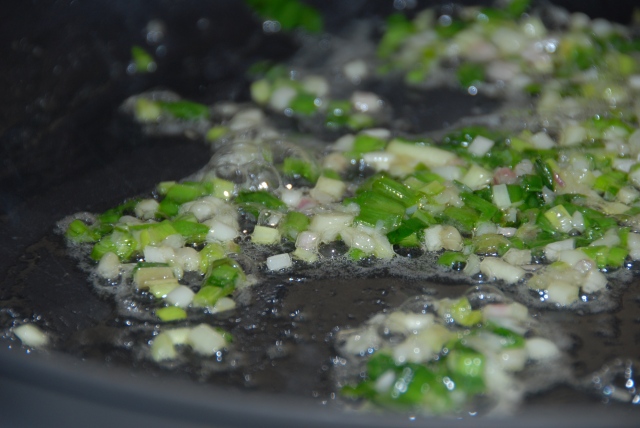 In a non stick skillet heat 2 T of butter.  When it starts to foam sauté half of the sliced ramps.  Cook until they begin to brown.  Place the cooked ramps in a large bowl along with the rest of the butter, a good couple pinches of sea salt, freshly cracked pepper, red pepper flake, the zest from 2 lemons, and the juice of one.  Add the finely chopped anchovy filets (and a little of the oil from the packed anchovies) and vigorously stir to combine.

Taste the butter and make sure it’s seasoned well.  (Spread it on a piece of bread and see how you like it – it’s a tough job but someone has to do it) Keep it in a sealed container in the refrigerator or roll it into a log using parchment paper – whatever you do – keep it on hand to add a flavorful Spring-time kick to whatever dish you decide to make over the next couple weeks.

I thoroughly enjoyed it mixed in with bacon, Swiss chard and spaghetti the other night – simply cook the thinly sliced bacon until almost crispy, sauté the shallots in the bacon fat until translucent, add the Swiss chard and a little salt.  Stir and cook until the chard is wilted.  Meanwhile cook spaghetti to al dente.  Drain the pasta and add to the sauté pan of goodness with a little of the pasta water.  Mix, twirl and toss in the pan and then add a large spoonful (or 2) of the ramp butter to coat.  Mix in well and top each serving with more lemon juice, zest and crushed red pepper.  It’s. Divine.